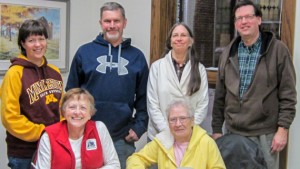 Our youth spent five days in June leading a VBS in Douglas, MN. Each morning, Hannah Coyle and William Beck along with Justin and David Scheerer, travelled 42 miles south to Douglas. We led a VBS based on Group Publishing materials for “Hometown Nazareth”. We were initially joined by two youth from Douglas. After the fun began, two more Douglas youth decided they were missing out and joined us!

Douglas started with a pre-enrollment of 11 out of 12 Sunday School children. A local day-care asked parents if they would like for their children to attend to attend and six more enrolled. Four more children came in from the community. We averaged 19 children per day with 21 children total for the week.

We began each morning with the traditional VBS flag and Bible ceremony. We sang songs: hymns, contemporary, and children’s fun songs; memorized Bible verses through actions and finger play. The children learned about daily life in Nazareth in Jesus’ day through crafts with a history lesson. They learned about the childhood of Jesus through stories by viviting with “Mary” in her home each day. We decided the children should learn more about Jewish school and temple traditions so we created a synagogue school led by Pastor Ricardo Alcoser with the assistance of Justin. The children saw both the Hebrew and Greek alphabet. They heard how men and women worshiped, how boys learned a trade and how the community-at-large functioned.

We divided the children into two tribes. Hannah became a tribe leader for “Benjamin” which included children aged four years through first grade. William became a tribe leader for “Judah” which included second through fifth grade children. Both hannah and William learned how to conduct a short class. Each day they taight the introduction to the lesson that was explored in Mary’s and the synagogue school.

David assisted as game leader aslong with the pastor. They played some games taken from the Roman times and Jewish tradition as well as traditional American games.

The children kept asking why we were not having VBS on Friday. It seems a good time was had by all. The children could all tell us at least three Bible verses and the stories from each day.

First Presbyterian Church of Red Wing, Minnesota, is a congregational family that seeks to grow in the love of Jesus Christ and to share that love with the community and the world.

In Person Worship and Online Worship (Masks Recommended for all)

All meetings held via Zoom and in person