Greg is originally from the Southeast and attended Presbyterian College in Clinton, SC where he received a Bachelor of Arts in Political Science. Greg immediately enrolled in West Virginia University to study Athletic Coaching Education, where he received his Master of Science in Physical Education. After some trial and error, he entered seminary at Union Presbyterian Seminary in Richmond, VA where he met his wife Heidi and completed his Master of Divinity.

Heidi grew up in a small town in Oregon. She received a Bachelors of Arts in Business Administration from the University of Puget Sound. After a few years in non-profit fundraising, she joined the Peace Corps and served two years in Kazakhstan. She then moved to the Washington, DC area and went back into non-profit fundraising before discerning a call to seminary. At Union Presbyterian Seminary, Heidi received her Master of Divinity as well as a marriage proposal from Greg Bolt.

Heidi and Greg are also strong advocates for children. They both have served as CASAs (Court Appointed Special Advocates) in Otoe County, Nebraska and they were licensed in the state of Nebraska as foster parents and are now licensed foster parents in Goodhue County. 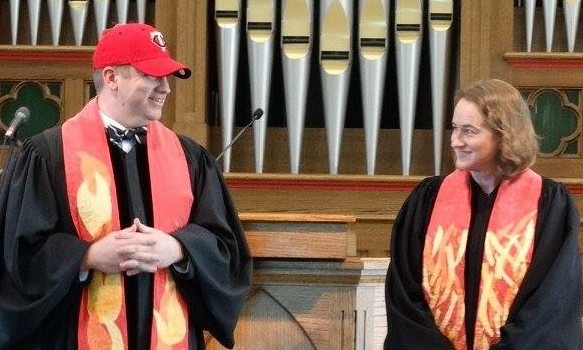 First Presbyterian Church of Red Wing, Minnesota, is a congregational family that seeks to grow in the love of Jesus Christ and to share that love with the community and the world.

In Person Worship and Online Worship (Masks Recommended for all)

All meetings held via Zoom and in person